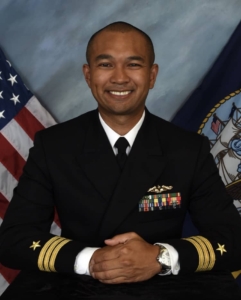 Cdr. Joshua Ragadio is a native of San Mateo, California in the San Francisco Bay Area. He graduated from San Mateo High School in 2000, where he was the Pep Band Director and lettered in wrestling and badminton. He attended the University of California, Los Angeles (UCLA) on a Naval Reserve Officer Training Corps (NROTC) scholarship and earned a Bachelor of Arts degree in Sociology and commissioned in the spring of 2004.

He completed his department head tour as Weapons Officer aboard USS Jacksonville (SSN 699) from 2012 to 2015 in Pearl Harbor, Hawaii, completed two overseas deployments to both the Seventh and Fifth Fleets and qualified for Command-at-Sea of Nuclear Submarines. He served as the final Executive Officer of USS Buffalo (SSN 715) and oversaw her final underway, nuclear reactor defueling, inactivation, and decommissioning in Bremerton, Washington.

Cdr. Ragadio served Navy Recruiting District Los Angeles under the Senior Minority Assistance to Recruiting (SEMINAR) Program in 2008 and 2019. He has been consistently requested among all highly qualified Asian and Pacific-Islander Naval Officers to meet with Los Angeles community leaders to discuss the vast educational, career and advancement opportunities the Navy offers with an emphasis on promoting diversity and the submarine force.

Ashore, he helped lead one of the premiere NROTC programs as an Officer Instructor and Assistant Professor at the University of Southern California (USC) from 2009 to 2011. During that time, he became a Trojan, earning a Master of Leadership degree as a Dean’s Merit Scholar from the USC Price School of Public Policy.

From 2015-2017, he managed a multi-million dollar portfolio as the Special Programs Deputy Program Manager for the Director of Submarine Warfare, at the Washington Navy Yard. Cdr. Ragadio most recently completed a tour at the Pentagon serving as a Battle Watch Captain for the Chief of Naval Operations and Secretary of the Navy.

Cdr. Ragadio is now the Executive Officer at NROTC Unit Los Angeles Consortium, book ending his storied Navy career where it all started.

Cdr. Ragadio is the third of four sons to Drs. Antonio and Delia Ragadio and part of a proud Navy Family. His two older brothers and their wives are all Naval Officers stationed in San Diego, CA. His younger brother and wife are both teachers in the Bay Area.

Cdr. Ragadio is married to Kelly Toves, a career communications professional. They are currently house hunting in Los Angeles with their puppy, Beignet.