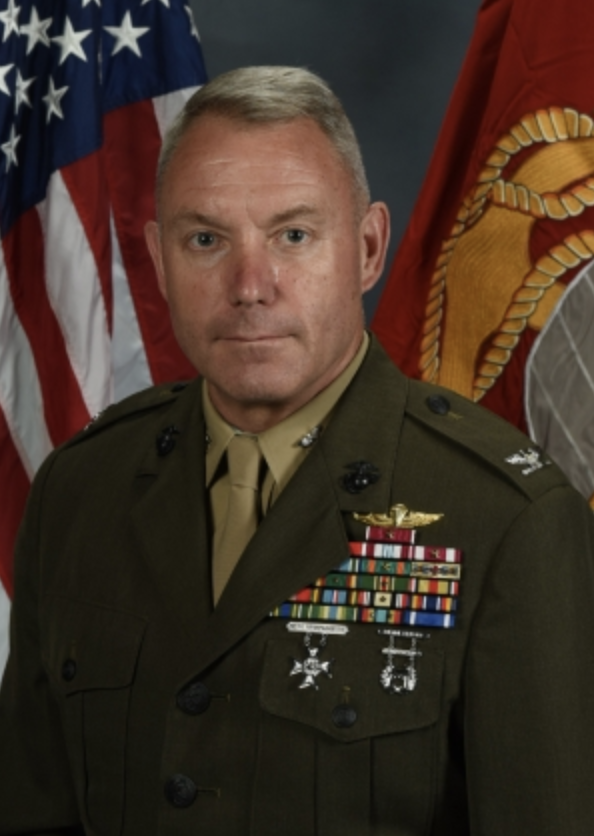 Colonel Sean M. McBride was born and raised in Butte, Montana. In 1983 he enlisted in the Marine Corps Reserve, serving with 4th Reconnaissance Battalion until 1990 when he graduated from Montana Tech with a Bachelor of Science degree in Occupational Safety and Health.  He earned his commission through the Platoon Leaders Course and was commissioned in January 1991.

After entry level training, Colonel McBride reported in August 1992 to I Marine Expeditionary Force, Camp Pendleton, CA, where he served as the Assistant Signals Intelligence Officer.  After completing a deployment to the Republic of Korea, he reported to the 1st Marine Division where he served as the Signals Intelligence Officer and Special Security Officer.  While assigned to 1st MARDIV, Col McBride deployed to Somalia in support of operation Restore Hope.

In June 1995, Colonel McBride transferred to Marine Support Battalion, Washington, DC, where he served as Battalion Adjutant.  In August 1996 Colonel McBride was selected for the National Security Agency Junior Officer Cryptologic Career Program.  From August 1996 through April 1999, he served in a variety of positions within the Agency, as well as serving as a Platoon Commander and the Company Executive Officer.

In July 2006, Colonel McBride reported for duty with I Marine Expeditionary Force, Camp Pendleton, CA, where he was immediately deployed to Iraq to serve as the Officer-in-Charge of the Multinational Force-West G-2 Iraqi Transition Team Support Cell.

In December 2006, Colonel McBride assumed command of 2d Radio Battalion. After returning from a second Operation Iraqi Freedom deployment, he was selected to attend the United States Army War College.

From July 2012 through June 2014, Colonel McBride served as the Assistant Chief of Staff, G-2 (Intelligence) with III Marine Expeditionary Force, Okinawa, Japan, before taking command of III MEF Headquarters Group and Camp Hansen also in Okinawa, where he served until June 2016.

From June 2016 through May 2019 Colonel McBride served as the Chief of Staff at U.S. Marine Corps Forces Europe & Africa in Stuttgart, Germany.  He assumed his current position as the Commanding Officer of NROTC Unit Los Angeles Consortium and Professor of Naval Science at the University of Southern California (USC) and the University of California, Los Angeles (UCLA) in June 2019.