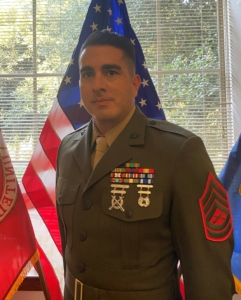 Gunnery Sergeant Loria was born on 8 December 1987 in Los Angeles, California. He later moved to Rialto, California. He enlisted in the Marine Corps in January of 2008. He attended Recruit Training at Marine Corps Recruit Depot San Diego. Upon graduation of recruit training in April 2008, Private Loria attended Marine Combat Training in Camp Pendleton, CA in May 2008. After completion, Private Loria attended Field Wireman’s course in 29 Palms, CA and was promoted to Private First Class.

In September 2008, upon graduating his MOS school as the honor graduate, he was meritoriously promoted to Lance Corporal and received orders to Combat Logistics Regiment 35, Okinawa, Japan. In 2009, Lance Corporal Loria was promoted to the rank of Corporal.

In 2010, Corporal Loria received orders to 2nd Battalion 8th Marine Regiment. Shortly after he received orders to 8th Communications Battalion where we worked outside of his MOS and was trained to splice and terminate fiber at MCAS Cherry Point. With the training he deployed to Afghanistan in support of Operation Enduring Freedom in 2011 at Camp Leatherneck.

In 2012, Corporal Loria was promoted to rank of Sergeant and received orders to 2nd Battalion 10th Marine Regiment where he served as the Wire Chief for Battery E and deployed to Afghanistan in support of Operation Enduring Freedom in 2012 at the Delaram District Center.

Gunnery Sergeant Loria is currently assigned to the University of California Los Angeles where he serves as the Assistant Marine Officer Instructor.

Gunnery Sergeant Loria holds an Associates of Arts in General Studies. His personal awards include the Navy and Marine Corps Achievement Medal. He is married to the former Natasha Taylor and has 3 children: Kaitlyn, Zoey and, Nicholai.