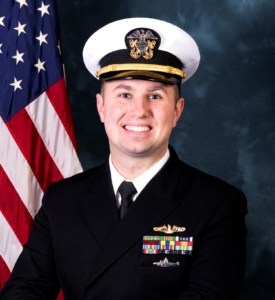 LT Rowan was born in Medford, OR to Tina and Michael Miller.  In October 2005, he enlisted in the Navy and completed his initial training at Great lakes in Chicago, IL, Naval Nuclear Power Training in Charleston, SC and Ballston Spa, NY.  In December 2007 he reported to USS Alexandria (SSN 757) in Groton, CT for his first sea tour.

While on USS Alexandria, LT Rowan completed 4 deployments to the CENTCOM and EUCOM AOR’s while serving as MLPO.  He then transferred to Naval Submarine Support Center (NSSC) Groton in April 2013 where he performed duties as an NRM and NRC. While there he graduated in 2014 with a BS in Nuclear Engineering Technology from Thomas Edison University.  He reported to Officer Candidate School in Newport, RI in June 2016 commissioning in October 2016.

LT Rowan reported to USS Nevada (SSBN 733)(BLUE) in June of 2018.  While there he served as the Communicator/Information Systems Security Officer, Tactical Systems Officer, as well as the Reactor Control and Damage Control assistant and completed 4 strategic deterrent patrols.

He has been awarded the Navy Commendation Award, Navy Achievement medal, with 4 gold stars, the Military Outstanding Volunteer Service Medal, Sailor of the Year for Regional Support Group-Groton and Junior Officer of the Year for USS Nevada.